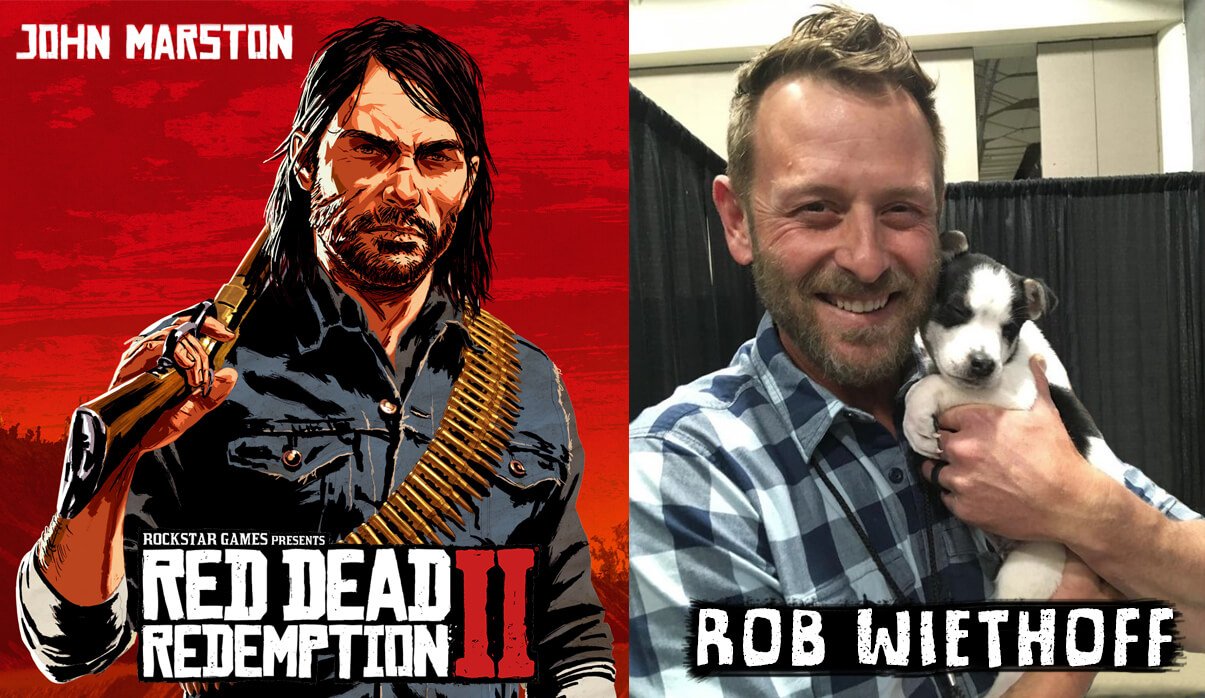 Rob grew up in the small town of Seymour, Indiana – the same town that John Mellencamp was born. He was focused on sports and initially didn’t aspire to become an actor. Though while visiting a friend in Los Angeles, he was encouraged by others that he could “make it” as an actor. Thus, began his acting journey. Like many people, Rob Wiethoff moved to Los Angeles with ideas that he could become a real “movie star”.

Working as a bartender to pay the bills, Rob booked gigs in commercials and movies whenever he could. Actively networking as often as possible, he eventually he got an agent. Then one fortuitous night, Rob received a call from the agent to go read immediately for an “unknown video game project” across town. Even though he was tired, he couldn’t think of a good excuse to not go, so he began his quick journey across town for the audition. He only got one take (which included him folding laundry), but for various reasons there was no opportunity for him to do a second take. So he left a bit discouraged, but still kept a positive attitude.

Surprising to Rob, a few days later he was notified that he successfully booked the gig! It was a role with Rockstar Games for a character that was still in development for the game that would eventually be advertised as Red Dead Redemption. Not an experienced gamer, Rob had no knowledge about Grand Theft Auto, Rockstar’s previous major game release. So while on the job, he was able to learn a lot about game motion capture performance and voice acting. Rob gleaned as much insight and wisdom from his fellow actors as often as possible and actively appreciates his experiences and journey.

After the first Red Dead Redemption, Rob contemplated staying in Los Angeles, though he and his wife wanted to raise their kids in a smaller town. Much like the character John Marston, Rob values his family above all else, as evident in this short video. Finding his anchor in his family, Rob works in construction to provide for them. He is open to other acting roles, though only if they make sense with his schedule and location.

One might think this is the end of his public story and perhaps file him away as a “one hit wonder”. However, Rob Wiethoff actively uses his platform to inspire and encourage others from all walks of life. He hosts live chats on his Instagram (@Rob_Wiethoff) where he brings people forward to talk. There are also videos of his house projects, specifically the journey of reclaiming the previous chicken coop to become his new hang out area. Plus, the new construction of #cluckinghampalace which occurred after they once again had chickens. Some other videos are fun jokes and others are him playing music. There’s a variety of good things.

More importantly, Rob shares everyday type scenarios and he’s always genuine, kind, and caring. I have had the honor and privilege to work with Rob at a few conventions and I am constantly inspired by his genuine authenticity and deep caring for others. What you see is truly what you get – there are no pretenses or egos. He has even mentioned that it seems unfair that only the voice actors are recognized for their work in Red Dead Redemption, which is an acknowledgment that I don’t hear often.

Journey to the Radio

Recently, Rob Wiethoff announced that he is going to become a local radio personality for WJAA.net (aka: 96.3 Total Rock Radio). While acknowledging his nerves, Rob admitted that he was a bit scared, and he might fail in this journey. The fear of failure reminded me of Steve’s blog about Taking Risks and the blog from Steve’s class with Charlie Adler. Both blogs explain how important it is to overcome fear to become successful.

If you are looking for some lighthearted goodness in your life, I suggest you follow Rob Wiethoff on Instagram and check in on his adventures. Enjoy his authentic nature and true kindness, through his ever-present attitude of gratitude and share his journey – wherever it may lead. Because wherever Rob is, there will be smiles and laughter!