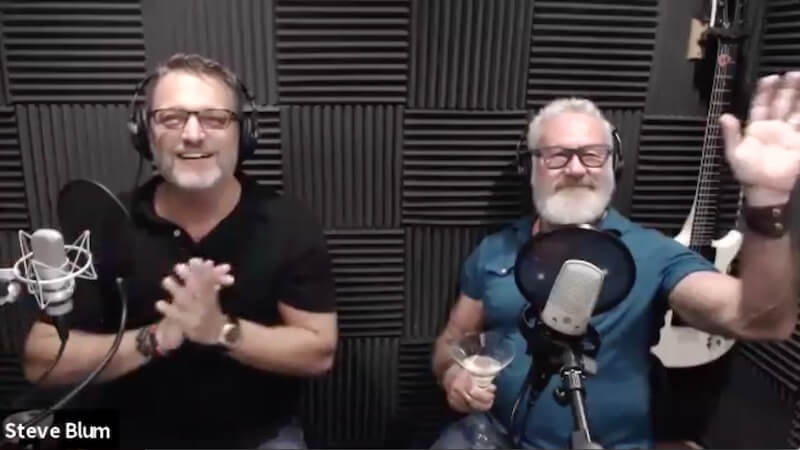 Ever since I started acting it’s there that I felt that I was home. To this day, the minute I walk on a stage, I’m happy and peaceful and calm. Getting me out there is a whole different story of shitting razor blades, I pee every 15 seconds, but then once I’m there, I couldn’t be happier. I’m overcoming fear all the time, and on the other side of that – is home.

The theater for me was the one place that I found I could cope with my life as a kid. I was a very shy kid and I was a little kid, I was skinny and I was bullied a lot. When I found my way to acting, it was like the heavens had opened and I existed, and I knew who I was in that space.

I didn’t start out as a voice actor, I started as an actor in the theater in New York. I would wake up in the morning, do 2 radio spots, shoot a commercial, make it to the theatre and then go sing in a club that night, then be flown out to LA to screen test for something. There was no label, I was just an actor. Then, around 1983, when I started coming out to LA I was labeled “a voice person”.

It’s like when you go to the Gym and you learn to isolate a muscle. That’s what happens with acting – you start to develop a muscle. I’m going to be 63 in 2 weeks, for me that muscle keeps developing.

Throughout my career, no matter what, I always fall back onto skill.

I think self-betrayal is the single, most criminal act anyone can visit upon themselves and other people. I’ve made so many personal mistakes in my life it’s embarrassing, and I’ve had to reinvent myself several times in order to survive my own idiocy. I would leave myself in order to make other people happy, or well, or comfortable.

I think it’s a common human trait, but I also think it’s something that artists tend to do more of because there’s such a hunger to exist as an artist. There’s this desire to please, specifically within actors, sometimes you’re in spaces where your survival hinges on people pleasing.

Yet you cannot please anybody but yourself as an artist because if you end up pandering or second-guessing to what you think a producer or a writer or a director, or a casting director or a studio want, nothing you do is going to reflect you! It’s only going to be you pandering and abdicating your own creativity.

My most strong belief in being an actor is: do your work privately – it will either land or it won’t land. They’ll like it or they won’t. Only one person is going to get the part, so what are you going nuts about? Someone’s going to get it, and if that person is you it’s not going to come from second-guessing.

Well, what strikes you about the character? Why’d you want that part in the first place? What is it that’s exciting for you?

All of that is private to the actor. When I’m directing I don’t give a shit what the actor is thinking, that’s their business. What I care about is “what are you feeling?”

Your thinking is useless, your feeling is something else. Don’t describe your feeling, just do it. That’s authenticity.

What gets in our way? I think this is a universal thing: fear. That you can’t do it. You’re not going to cut it, you’re going to be judged, you’re going to stink it up. These are all huge impediments to your authenticity and your success.

What is the one thing that can help you when overcoming fear? Skill! Without skill of course you’re going to be afraid!

This goes back to training, to knowing what you’re doing. As voice actors we’re not just the voice, we’re also telling stories. How do you tell a story if you don’t know how to tell a story? How do you know where that story lives and how to convey it and the tools and the skills in order to do that?

You develop your skills as an actor.

Charlie was directing me on a show and it went so fast and furious that I was never sure I was giving him what he wanted. He was absolutely positive, and dead-on sure when he had it, and it went faster than any session I can ever remember. I had no idea how it was going to cut together, but I trusted him because I know he’s brilliant at what he does. I walked out of the room, didn’t think about it again, and many months later the animated series (Kung Fu Panda: Paws of Destiny) comes out and it’s probably the performance I’m most proud of.

Charlie never gave me the time to think about it. He trusted me and I trusted him, and the skill set that I had developed before I walked into that room overrode any mental processes that might have gotten in the way.

Right! Your skill and your facility to overcome fear and the need to control things is what made it wonderful. You could have stopped at every junction and said “I’ll julienne not crinkle cut” and I would have said “No! just fucking do it!”. But you were good, and you did it and I know you had questions in your head, I saw it.

You’ve got to remember, you’re in a scene, the scene lives. You play it and you explore it while you’re playing it. There is nuance, and there are augments, but don’t hang onto the furniture. Remember your lines, then shut up, and go home. This (head) doesn’t act, this (heart) is what acts.

People like to list the many wonderful achievements of my career, but for every one of those achievements there was some stink-on-ice-minute matched in that wonderfulness. I’m also a legend in stupidity.

You must stink, you have to fall. There’s no way to not, as a human, as an artist, there’s no way. We’re all in the boat called life. Either paddle good or keep plugging up the holes. You can’t just stay afloat.

Again, going back to the analogy of a muscle: when you’re developing and building muscle, you’re tearing it as well, and it’s gonna be sore and it’s gonna hurt. Eventually the muscle builds from the recovery of those tears.

Steve: Are you still ever scared?

Charlie: Every fucking minute of the day.

For more info on Charlie Adler visit his website at: http://theofficialcharlieadler.com

For access to this and every other Class in Steve’s Teaching Series, try our special Welcome Offer of only $49 for your first month: https://www.blumvoxstudios.com/welcome-offer/