To educate, inspire, and provide a safe space for creativity, personal growth, and a sense of belonging through voiceover classes. Blumvox Studios supports people of all ages, all over the world to find their purpose, by tapping into imagination, unique potential and individual greatness through the art of Voiceover.

Voiceover Classes with Steve are like nothing you’ve ever participated in before! Even if you’re just starting out this is one of the most unique curriculums you’ll find online when it comes to acting AND voice acting!  Here’s what one of our students had to say about our Voiceover Training…

“Steve’s classes are fantastic! Both the teaching series and the advanced classes have been an amazing experience and I have learned so much! The teaching series has covered so many topics and Steve has done a masterful job explaining them. It has helped expand my knowledge in the technical, business, and artistic side of voice acting. Steve also takes time to answer student questions in the Q&A portion which has opened up wonderful discussions. In the advanced series, I personally have learned so much from the one-on-one time Steve takes with each student. He tailors each session to what the student wants and directs and counsel[s] them on the chosen topic. These classes, both the teaching series and the advanced series, have built my confidence and skills, and I am very grateful to have met so many wonderful people.”

Learn how to become a Voiceover Artist from one of the most prolific actors in the business.

Veteran Voice Monkey Steve Blum is best known as the voice of “Spike Spiegel” from Cowboy Bebop, “Wolverine” from several incarnations of X-Men (animated movies, games, the Wolverine and the X-Men TV Series, The Super Hero Squad Show, X-Men Anime and more), “Zeb Orrelios” and dozens of other characters from Star Wars: Rebels,  “Orochimaru,” “Zabuza,” and others from Naruto, “Green Goblin” from the Spectacular Spiderman series, “Heatblast,” “Vilgax” and “Ghostfreak” from Ben 10, “Grayson Hunt” (Bulletstorm) “Grunt” (Mass Effect 2 and 3),”Zoltan Kulle” from Diablo 3, “Abathur” from Starcraft 2:Heart of the Swarm, “Tank Dempsey” (Call of Duty), “Killer Croc” from Arkham Asylum, “Oghren” (DragonAge),“Vincent Valentine” (Final Fantasy VII), “Leeron” (Guren Lagann), “Jamie” from Megas XLR, “Storm Troopers” and many others in most of the Star Wars games, The voice of 7-11, dozens of Digimon and a gigantic list of other characters from Anime, Video Games, TV and Film. In 2012, Steve was inducted into the Guinness Book of World Records as Most Prolific Voice Actor in Video Games – appearing in almost 300 games (now over 400!)

Lately you can catch him as Brimstone in Valorant, The Demon Bull King and Huntsman Spider in Monkie Kid, Golgan and Tuftan in Kamandi: The Last Boy on Earth, Zartan on Robot Chicken, Yumyan Hammerpaw in Kipo and the Age of Wonderbeasts, Jindiao in Dreamworks’ Kung Fu Panda: Paws of Destiny, more Star Wars stuff like The Mandalorian, Star Wars Resistance, Jedi: Fallen Order and as Admiral Karius in Vader Immortal, Wheeljack in the BumbleBee Feature film, Tank Dempsey in COD Black Ops,  Grimstroke in Dota 2, Roy Evans in Angel of Vine – the true crime podcast, as “Shoe” and “Sparky” in Laika’s The Boxtrolls, and as astronaut Quentin Thomas on Hip Hop superstar LOGIC’s amazing albums “The Incredible True Story,”  “Everybody,”  and “Young Sinatra 4” and on camera in Logic’s music videos for the songs “Everyday,” “Take it Back,” and “Icy.”

Also appearing as “Nar Est” and “Rasper” in Amazon’s Niko and the Sword of Light, “Frank” the flying monkey and others in Dorothy and the Wizard of Oz on Boomerang, as “Makucha” the Leopard on Disney’s  The Lion Guard and as Lovable Pub Thug “Attila Buckethead” and more in Disney’s Tangled television series! And a bunch of characters in Star Wars Rogue One, Solo, and Rise of Skywalker, Incredibles 2, Goosebumps 2, Shazam and Critters Attack feature films! 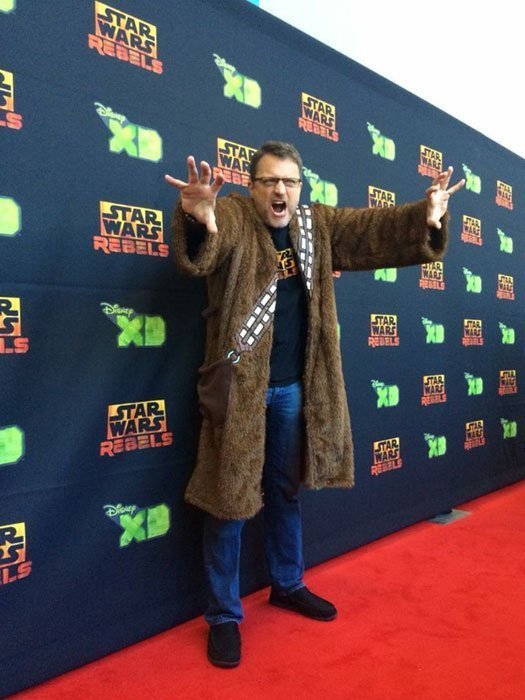 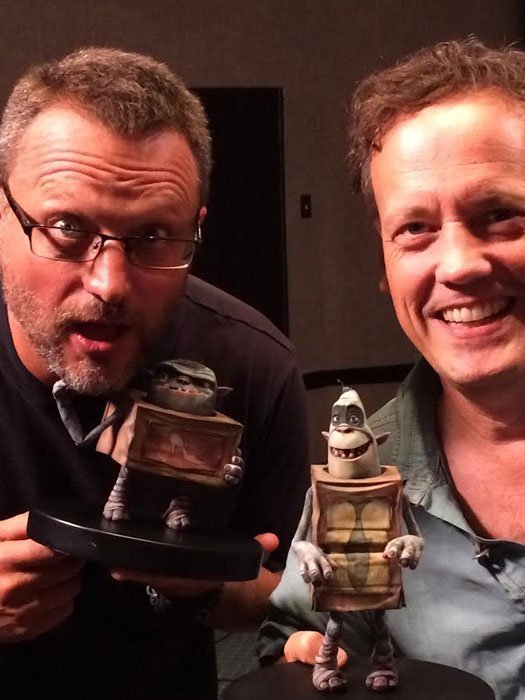 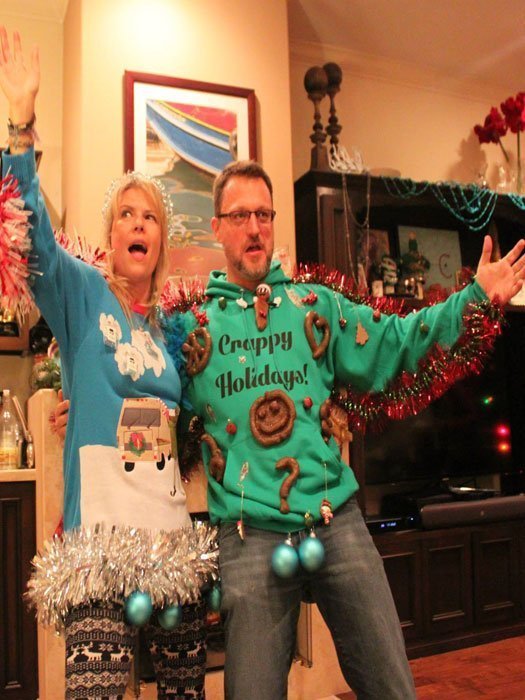 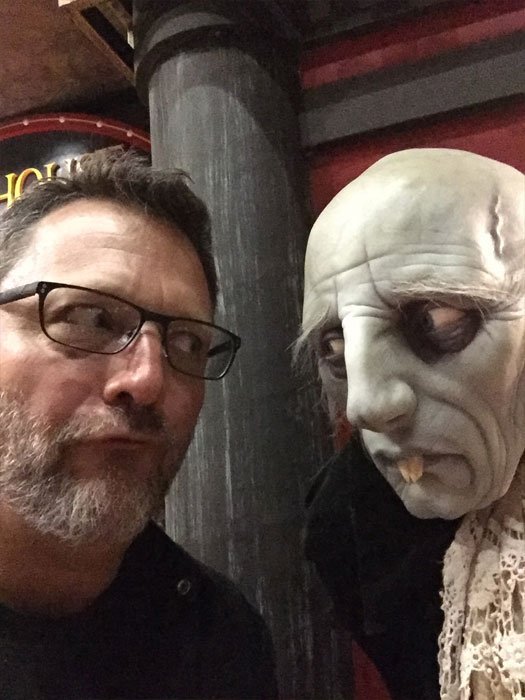 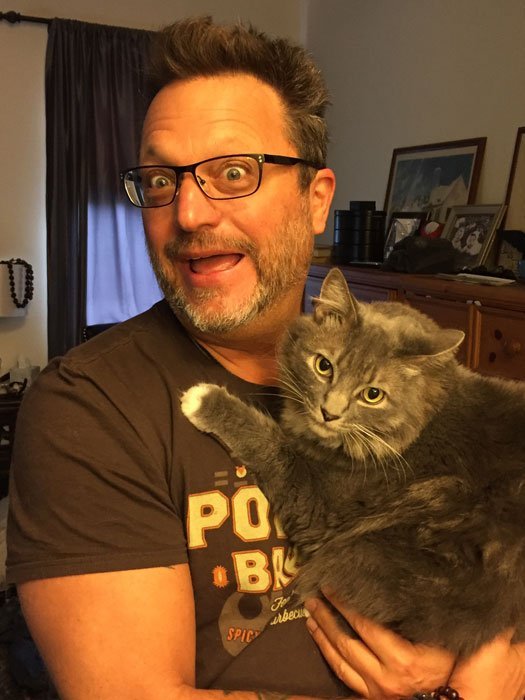 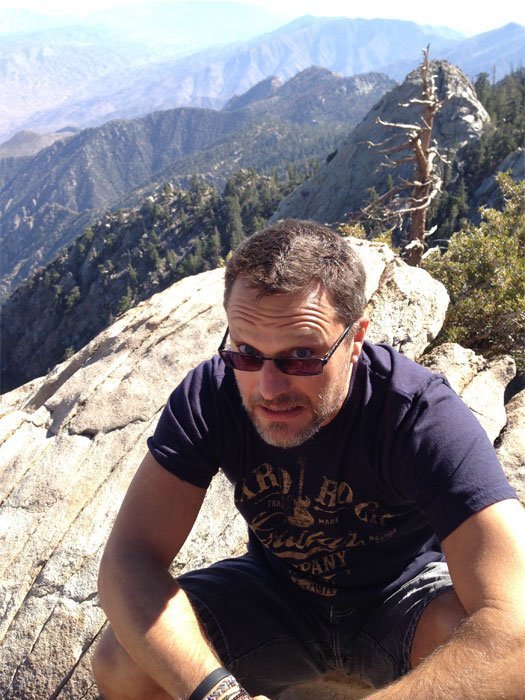 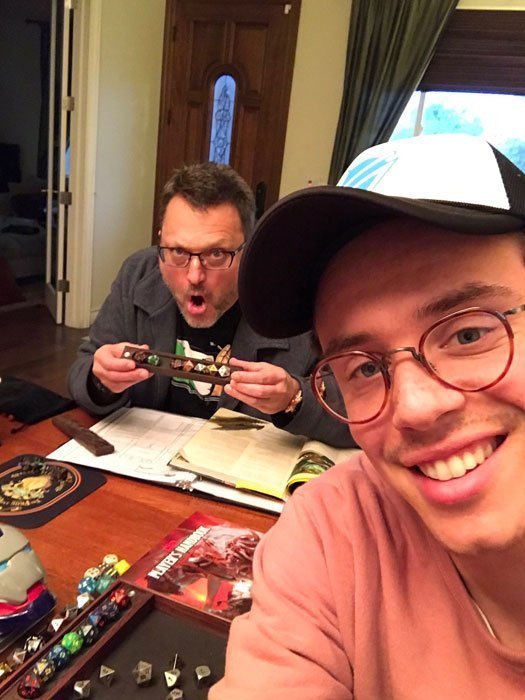 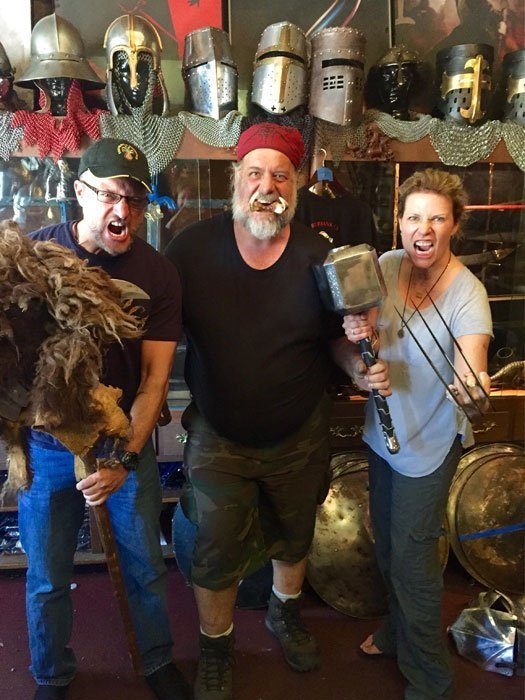 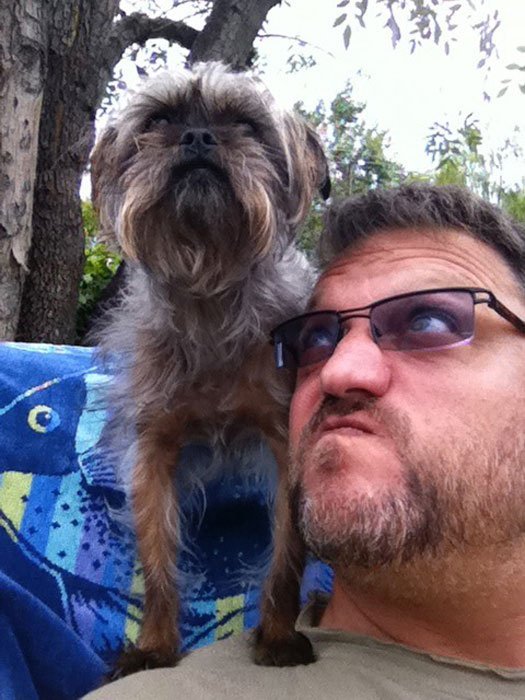 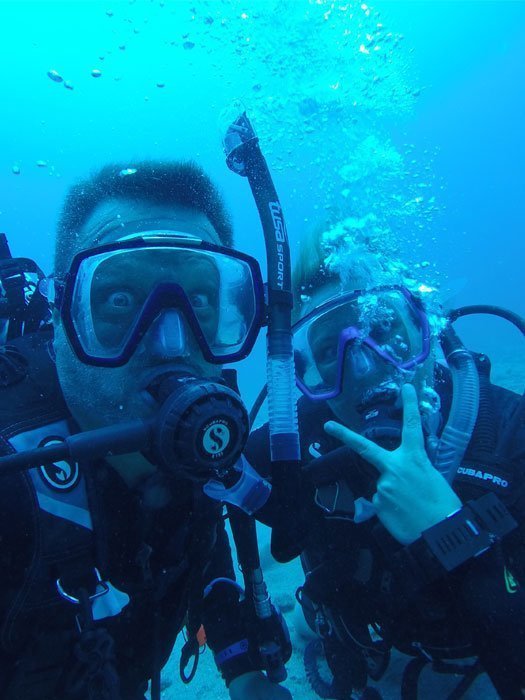 In his free time

When he’s not spitting into microphones, Steve loves to get outside. Hiking, swimming, scuba diving, playing with his animals, meditation, travel… And hanging out with friends and family. Disgustingly normal stuff! In fact, wherever he happens to be in the world, Steve forces himself to be outside for at least 20 minutes per day just to breathe real air and get away from Blumvox Studios electronics. He’s also passionate about being of service, volunteering to help others, and of course loving up the fans at conventions (appropriately, of course). In fact Steve travels to conventions in more than 20 cities per year to meet the fans personally. Lately, the nerdy side takes over once in a while, causing instances of D&D, Renaissance faires, voiceover classes, hunts for collectibles, and watching movies and TV shows that he should have watched years ago. And eventually, he’ll get back to his love/hate relationship with his guitars. 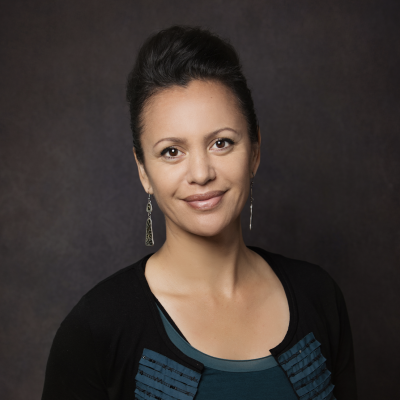 Reirani Taurima is a wildly talented author, singer, voice actor and designer. She’s our chief engineer and organizational wizard.  Hailing from beautiful Invercargill, New Zealand, Reirani is at the top of her game from the bottom of the world. This brilliant, beautiful, badass Maori warrior has been an integral part of Blumvox from the very beginning. You’ve heard her holding the high ground for our classes, making sure that everyone has the best experience possible. With her impeccable moral compass and deep love for humanity and the planet, there is no one better suited to be the guardian of the Blumvox gates. 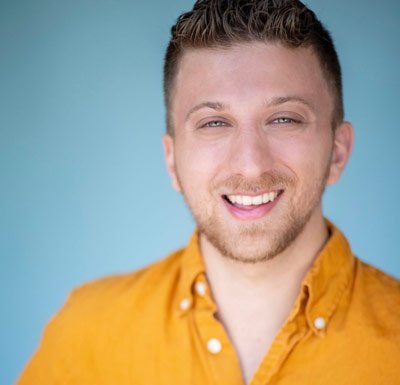 A gargantuanly gifted actor, singer, engineer, tech whiz and honestly one of the most decent, thoughtful, hard working, caring humans on Earth, Brandon Blum also happens to be my son. He handles all of the tech for our classes and is our go-to guru if anything’s askew. He’s witnessed my journey firsthand, and is here to help you in yours. He facilitates our classes, edits our videos, and distills your questions into words I can understand. He tirelessly integrates and manifests our team’s vision into real world solutions that will help to guide you toward your goals. He also happens to be a perpetual moment of Zen. 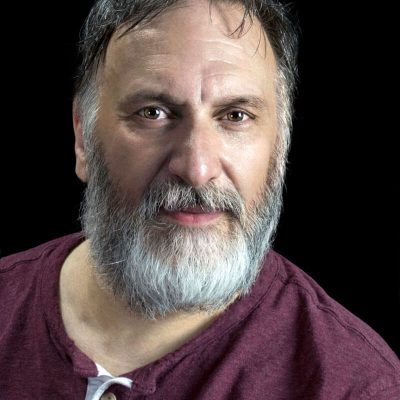 Our amazing Webmaster and web designer John MacKenzie is the man behind the machine.  Don’t be fooled by his chill.  He’s a fountain of creativity and a force of nature, keeping our website humming and beautiful.  He also happens to be a musician, songwriter, theater director, scenic and lighting designer for the stage, and one of the coolest people we know.  He’s a native of Massachusetts, a graduate of the Boston University Center for Digital Imaging Arts, and he has his own full service Web Design and Graphic Arts Company. He built our website and can build yours too!  Check out his brilliant work at JohnMacArts.com. 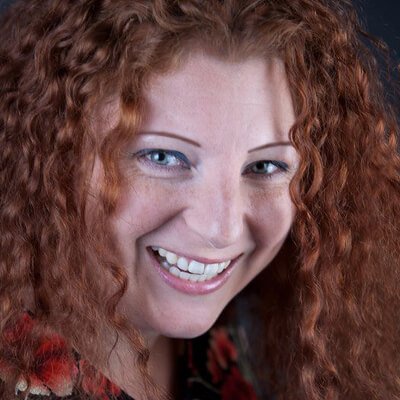 And speaking of forces of nature, Gwendolyn King is the queen behind the scenes.

Gwen worked with me for years on the convention circuit as my liaison/bodyguard/troubleshooter for signings, panels and appearances, and in 2020, I finally convinced her to work with us full time. She’s a content creator, analytic curator, marketing relater, social outreach instigator, community generator, and everything facilitator.  She’s a passionate musical theater nerd with a B.A. in Business Administration with a dual focus in Marketing and Management from the University of Washington. She’s also one of the most dedicated, deeply caring humans I’ve ever met.