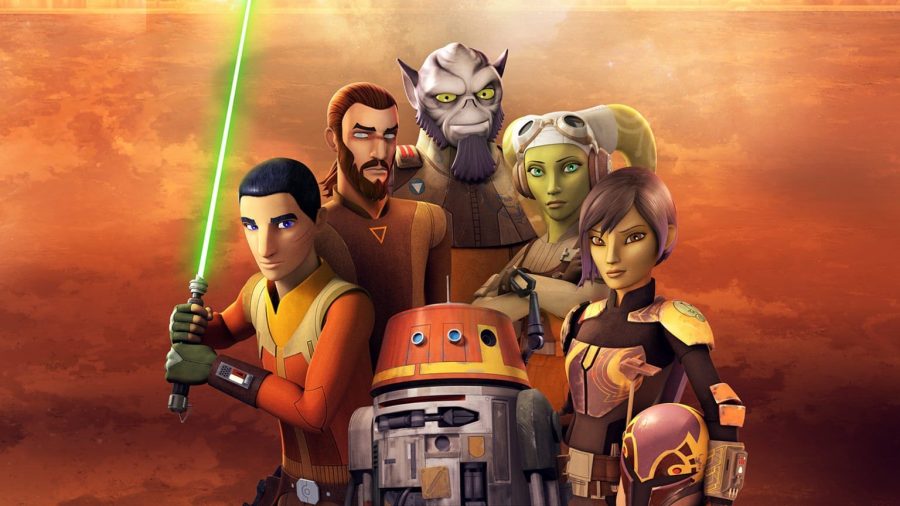 Star Wars Rebels and the end of an era (and a job!)

So I recently wrapped one my favorite shows ever, Star Wars Rebels. This year marked the 4th and final season of an incredible odyssey, and the opportunity for me to play in a universe I loved as a kid, though I couldn’t possibly have imagined “growing up” to become a member of the crew.

Rebels was a huge part of my life for years. While being out of a job sucks, the thing I miss most is seeing the Rebels crew every week. We all bonded deeply on that show, including everyone on the other side of the glass, which is unusual for animation. We truly became the family you saw on TV, albeit (thankfully) with 80% less chance of dying week-to-week. While we still get together as often as we can for dinners and events, that time in the booth can never be recreated.

Star Wars and Lucasfilm is A Family

I’ve said it many times, but the Lucas family is unlike any other. We geeked out together, they included us in the collaborative process, and we became friends for life. All of us were heavily invested in giving the fans something special and creating a show of the highest quality possible. As such we made something we wanted to watch!

When we were told it was ending, it was painful for all of us. I don’t think I’ve ever wanted a show to continue more than this one. That said, it was tempered by the knowledge that Dave Filoni and company could tell the story they wanted/needed to tell and finish it on their terms. Clone Wars didn’t have that luxury the first time around. Rebels felt complete to me and as a fan I found that very satisfying.

The Ups and Downs of Life as a Voice Actor

That’s the thing about this business. You effectively lose your job often, sometimes every week! You can bring your all to a part and then you have to… well, let it go. In my Voiceover Classes I tell my students that being a voice actor requires “emotional elasticity.” Being able to handle the ups and downs of the business, the absence of callbacks, the re-casts, the cancellations, and the completion of shows you know will never be again. We’re not just voices, we’re often fans too, and because of that, we’re deeply connected to the characters we bring to life, and are all too often sad to see them go.

That’s the gig, and learning how to be emotionally elastic is critically important if you want to get into this business and last.

Rebels was like no other show I’ve ever worked on. We stepped into and lived and breathed in the magnificent Star Wars universe. I mean, come on…STAR WARS!!! This beloved place of future legend. We had the opportunity to voice characters that will now be considered canon… forever! That was an honor no-one took lightly. Sometimes we’d discuss things as simple as the name of a new fruit – like the Meiloorun – for an hour. If it was going to be canon we needed to make sure it was right. We were often witness to (and sometimes participants) in nerd battles on both sides of the glass at recording sessions.

That’s not something you get to experience with other projects. Most often those kinds of decisions are made well in advance and they don’t need or even welcome input from the actors. They always allowed time for us to be fans and discuss the stuff we knew would be topics of deep nerd conversation for generations to come.

In Everything – Stay Grateful

I guess by now it’s pretty evident how much I love and appreciate Star Wars. And I’m grateful every day that I get to do this work at all. Voiceover is so much more than just standing at the mic grunting, screaming, reading some lines and going home. You have to love it to your core to endure the stuff it takes to make it in this business. You also have to love it so much, that when a show like this ends for the right reasons, you can let it go.

Characters like Zeb remind me of the power of connecting to a character and embuing it with as much of a real life as I can in animated form. And the characters always return the favor. I’ll carry a part of him with me forever.

In fact, the best characters bring out parts of me that I may have been uncomfortable with – or even completely unaware of!
Creating art can be a deeply symbiotic, humbling and in some cases course-correcting relationship if you allow it to be. To do it most effectively, you need to let walls down, drop pre-conceived notions and to trust yourself enough even when/especially when – things become their most uncomfortable.

Voiceover – like the Star Wars stories – Is about “The Inner Game”

Part of why I focus so much of my teaching around the inner game is so that new actors can build a solid foundation of confidence. Confidence in themselves and in the qualities that they were born with. Rather than only trying to emulate someone else they admire, I encourage my students to become aware of their own unique talents and abilities. To develop their foundational skillset in addition to what they already possess.

There is only one person on the planet like you. And that person is amazing, so please never underestimate your gifts.

The Physicality of Voice Acting

With regard to the technical side of voicing someone like Zeb, I’m often asked what I did to physically prepare for those sessions. It always began with warmups. Exaggerated vowel sounds, low note humming, stretching the face and body – and enunciation exercises, etc. It’s so important to do this, I taught an entire class on warmups and cooldowns.

Compared to video games, the outbursts of vocal stress in Rebels were pretty limited. Still, I followed the same protocol I always do for vocal care – sleep, hydration, rest, and Chinese herbal throat drops.

Though occasionally a little painful, Zeb’s outbursts were actually healing for me! It allowed me to blow off a little steam from daily frustration without the consistent, unrelenting throat ripping that the characters in a video game so often demand. I always looked forward to playing Zeb.

Learning how to BE Directed

Something else I tell my students all the time is to listen to the director. In the case of Star Wars Rebels, the Crew (on both sides of the glass) was tight. We were dedicated to the franchise and we were appreciated (out loud!) by the ones in charge and encouraged to contribute. There was a palpable mutual trust, and that collaborative energy made for a harmonious work environment.

That’s not always the case, and as an actor it’s very important to remember that you are only there to help realize someone else’s creation. Sometimes a show has been in the works for years before you ever get a chance to be a part of it, so listening to the Director and following directions is not only expected, its morally the right thing to do. Creators are profoundly connected to the characters. As a voice actor, it’s your job to bring them off the page while respecting the vision of those who put them there.

For me, working with Lucasfilm was a dream come true. I’d never before been given that kind of access to so many of the actual creators. From the story group, writers, animators, editors, engineers, music department, lighting, fx, executives, assistants, interns, PR and everything in between, we were allowed to see how it all fits together from the inside. It’s no easy thing to make a show this good.

Lucas let us meet some of the hundreds of people required to do this, and encouraged them to meet us. These shows involve incredibly creative people at all levels, hence why I’m often quoted saying “I’m just a voicemonkey.” I do my best to bring a character like Zeb to life, but I’m only a small bearing in a giant machine that has been busy building long before I walked into that booth.

This show will always be a special part of my life, and I’m honored to be a part of the Star Wars Universe, even if just for a hyper-second in the grand scheme (though I’ve made it annoyingly obvious that I’m available for anything they may do in the future!).

If you haven’t watched Rebels yet, as a fellow fan, I highly recommend it (and would even if I had nothing to do with it)! It’s a beautifully executed piece of important Star Wars connective tissue and for some… a perfect gateway into this wonderful universe. May it continue for generations to come and may the force be with you.