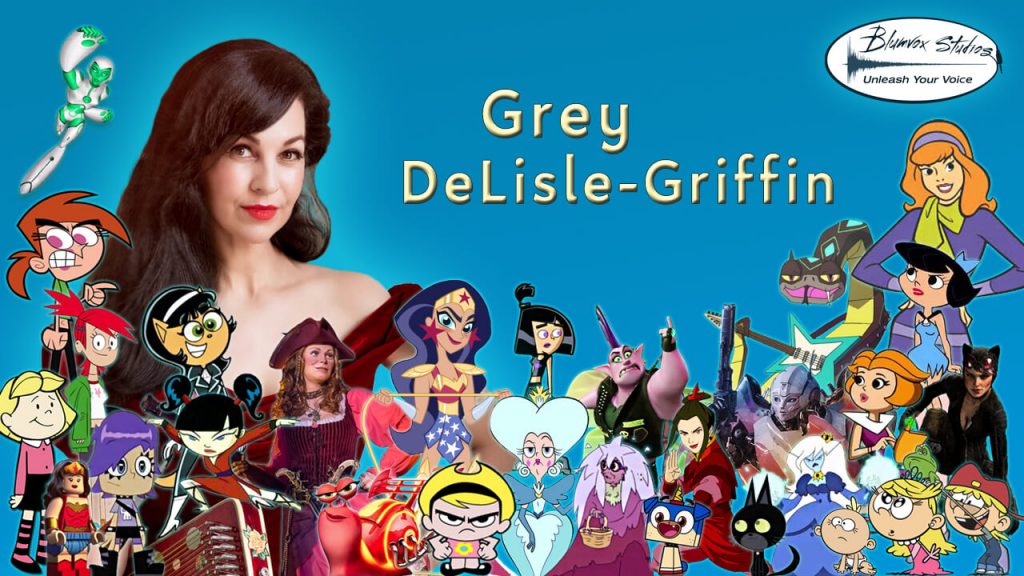 Steve: Recently, I was lucky enough to spend an evening with the gregariously delightful Grey DeLisle Griffin. Enjoy this excerpt from Class 55, where Grey shared her life, wisdom, and lots of laughs, so that others might learn and grow.

Steve: I read that when you approach a new character, you figure out the laugh first. Can you explain how that process works for you?

Grey DeLisle-Griffin: It actually comes from my childhood, because my grandma didn’t like my laugh. I had a wonderful grandmother, she raised me and she was a critical, Mexican grandmother. In her mind “Ladies were ladies” and she always had me in beauty pageants. It was so not me! I was goofy and I just wanted to be funny, I had no interest in being cute.

So she didn’t like my laugh, and she would often say “Mijita, your laugh is so terrible. Don’t do it, just say heeheehee”. She’d say “You’ll never get a husband with a terrible, big, ugly, laugh.” Hah, I showed her, cause I’ve had lots, and I have the names to prove it. Anyway, I used to think “A laugh is an organic part of a personality!.” You can’t fake it. I couldn’t just go “hahaha!” if I thought something wasn’t funny.

So when I was approaching characters I would think “What’s the most organic noise that this person would make? Their laugh!” So when they’d show me a picture of a new character, I’d start with making the face based on what’s in the picture.

When I see a picture of a new character I look at the face, so that might be “Oh, there’s big teeth there ok. How does the air blow up against that?” You don’t look cute when doing it, but it DOES gets you out of your head and making noise, and that’s important when figuring out a new character! I always tell people, don’t be afraid to be foolish or look weird because that’s the job!

On Being of Service

Steve: What does “Being of Service” mean to you and why is it important for somebody just starting out to make that a priority?

Grey DeLisle-Griffin: Well as cheerful as I am, I do still get blue. I find that when I’m sad, helping people is the only thing that brings me out of it. I make a habit of helping people, especially in getting into this business.

I’ve got some friends who don’t want to help people get into this business. They’re

like “Grey, we don’t need any more people in our world, it’s just going to make things more competitive!”. Well I believe a career is like a little pond. If you keep everybody out of your pond, and you don’t want anybody to get into your pond, your water gets mucky and stagnant. Fear (of someone taking your part) is stagnant. It doesn’t let anything in, and it doesn’t let anything out.

Do One Thing Every Day For Your Art

Steve: You once said “Don’t wait for someone else to give you permission to do your art.” Can you elaborate on that?

Grey DeLisle-Griffin: Back when I was at this fine art high school we had an inspirational speaker come in. He was from LA and was an actor, and we were all SO excited, we hung on his every word! He said “Every day, do one thing for your career. Every day do one thing toward what you want to do, and at the end of that year you’ll have done 365 things for your career and you will be further ahead”. It was so so good!

It’s just one thing, whether it’s sending an email out or signing up for a class, or redoing your resume. Take some pictures with your friends. Do a cold reading. Get together and read a play. Just one thing.

Steve: A lot of people in our community tend to come from a musical background. You’re a true recording artist, with albums, EPs, singles – including your latest single, Tonight You Belong to Me. It’s one of my favorite things you’ve ever recorded. Just beautiful. How do you think your understanding of music has affected you as a voice actor?

Grey DeLisle-Griffin: I think you need to have a musical ear because each character has a musicality to it. Especially in voice matching. When I started the Simpsons, I’d listen to Russi Taylor doing Martin, because she had a musicality with it. There are notes in there.

I’ve worked with people who aren’t really actors or musical. Maybe they’re someone’s cousin or they lucked into it, and you can tell. They’ll be directed a certain way and they’ll say “Wait, where do we go?” They can’t hear it. I can hear it, but they can’t.

But you know I grew up with a grandma who used to sing in big bands. She sang with Tito Puente and my mom was in bands my whole life. When we’d get together as a family my uncles would play guitar and we would all sing and harmonize. Music’s always been there forever (for me).

I sing in cartoons, and it’s amazing when a fan comes up with a record from that, it always makes my day. In the music world, people say “Wait, what do you do during

the day?” and I’m like “I do cartoons.” But when I’m in the cartoon world, I make folk records and I play the Appalachian harp. I think musicality really does help voiceover.

Where should a new Voice Actor begin?

Grey DeLisle-Griffin: Well I always say don’t tape with casting directors until you are really really good. There’s so many people who make the mistake of taking a casting director workshop when they’re a beginner. They might be good but they’re also really green. If they show that, they’ll forever be in that casting person’s head as “someone who had a lot of potential but was not polished at all”. Beginners don’t know this, cause they’re beginners! They’re just thinking “This will be a fun thing to try”.

It takes a lot to get in front of a casting person, to get that opportunity to show them your best, and then…to not be really prepared? Don’t do it!

I DO say “Take every actor’s workshop.” Take a ton of things from actors because you can make mistakes in front of actors and they know that you’re a beginner. They can’t cast you anyway! They’re just there to give you their knowledge. Soak up as much information as you can. Then when you’re really really good, make sure you have your demo on hand and go take online courses with casting people.

Also, remember this. These workshops are not a class, you’re not there to learn. You’re there to shine like you’ve never shone before! If you wait ‘till you’re really good, you’ll also be ready when they say “I really like you, do you have a demo?”.

That’s what I did. When I was really ready and with my demo in hand I did this “workshop” that cost $500 and you got to meet five casting directors. I still work with those same five directors every week! It was the best $500 I spent, even though I knew I was going to have to put it on a credit card and spend a month waiting tables to pay for it!

So tape with actors first, then go do your demo. Don’t meet with casting people until you are absolutely ready. Even if it’s a beginners workshop.

Steve: That’s a brilliant piece of advice, because you can blow it and not have another chance for a long time. If you go in and shine like you described they will absolutely remember you. Often they’re teaching those workshops to discover new people.

Grey DeLisle-Griffin: Yes. Think of it not as a class, it’s a showcase. Be ready with your tape and be as polished and prepared as you’ve ever been in your life. You don’t get a lot of chances in front of people like that.

This was Class #55 in Steve’s Teaching Series, and all classes are available on demand 24/7 along with live class once a month with an industry professional. If you’re not yet a student, click here (link: welcome offer page) to get a special 50% discount off your first month!