Otherwise known as “But I live in the middle of Nowhere”. 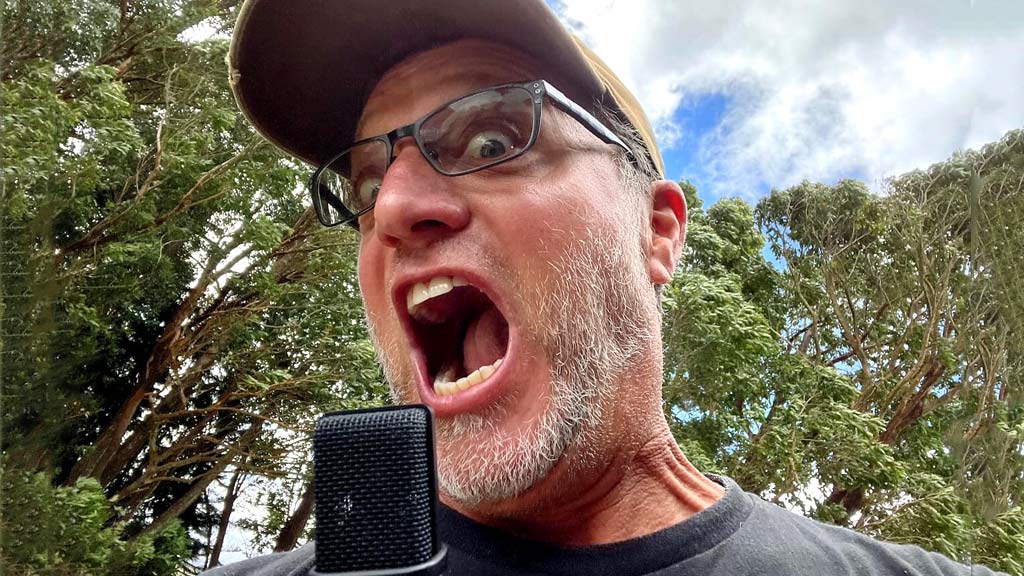 One of the most common reasons people think they can’t succeed in Voiceover is:  “Where I live”.

I can’t express how many times I’ve heard  “I wish I could get into Voiceover but I don’t live in the right place”, “I don’t live in LA, Or New York, or Atlanta”. As you’ll see in this article it no longer matters where you live!

You can do Voiceover from Anywhere

Since early March of 2020, I’ve been in a client’s hired recording studio 4 times (out of dozens and dozens of sessions).  3 of those sessions were last month and ONLY because all of my equipment was in a container on a ship to my new home. I realized by late March that year, that recording from home, with pro quality sound and connectivity, could become a much more long term requirement.

Fortunately, I’d been recording Toonami from home for many years. I had a solid recording setup in a closet.  The neighbors were about to start remodeling next door, so it was about to get real noisy, real quick. Knowing I was planning to move in about a year, I hunted for a good, used, portable, soundproofed recording studio.

Turned out to be the best investment I ever made.  I used that space for almost a year and a half and recorded EVERYTHING in it.

I also had to learn Source Connect, ipDTL, Connection Open and many other sources of connection to other studios across the globe.  And I had to dramatically up my game in my ability to record and ride audio levels on the fly.

I just relocated to Hawaii a few weeks ago. The first thing I prioritized was getting that recording space to my new location.  I’m all set up now in a small, rainy country town on a hill in Hawaii.  And getting better sound (and more work!) than I’ve ever been able to accomplish in the big city.

When I first arrived on the island, I had nothing but my portable rig and a dinky closet.  Here’s what that looked like.

Though my current setup is now MUCH more sophisticated, I could’ve made that work for another year if I had to.

We’ve all proven that we’re more than capable of doing this from home, and the sessions for me have actually been going a lot faster and more efficiently. Without having to commute to outside studios, I can fit more sessions into a day, and working alone, I can do all of my lines on a project in one or two hours (or less!), when it would sometimes take a half day for each one.

The even better news is that there’re more opportunities now than there ever have been in the history of this business to do this from anywhere in the world, but you have to be ready when the opportunities come.

The better you can get your gear sounding at home, the better off you are. It doesn’t necessarily require a lot of money. Dee Bradley Baker has some great info on his website at iwanttobeavoiceactor.com about building a little studio with PVC pipe and moving blankets. It might only take 100 bucks to build a little booth, and you can get broadcast quality sound out of something like that.

You need to know your mic technique, have a fairly good quality mic and a working understanding of how to record without popping your P’s too much or blowing the microphone out, and of course the skills necessary to do the job!

If you can prove that your home studio is usable as a broadcast quality studio, and you know how to use it, it could potentially get you a lot more work. It also makes anyone with the proper skill set MUCH more marketable from wherever they are in the world.

That’s a big blessing for a lot of you who don’t live in Southern California, or in New York or one of the big places where they’ve traditionally recorded VO.

If you can do this from home and start building your reputation now, it will serve you really well later on.

What do other Voiceover Artists have to say about it?

Tom Kenny: Having bumbled our way into one of the only semi pandemic proof areas of show business is incredibly fortunate! I knew from the get go of this thing how fortunate we were. Especially with cartoons, everybody all the way up and down the pipeline has been able to pretty much do what they do from home. If you’re the character designer or the background designer or the music guy or the Foley guy or the voice actor or whatever you can do that from home.

I feel like I found this four leaf clover, like a lottery scratcher fell out of the sky and hit me in the head!

It’s important for people to know that if they want to record at home they don’t have to have Electric Ladyland or Abbey Road Studios. I’ve got a $200 mic and an Ethernet connection that sometimes works and often doesn’t, and cartoons for me have been cranking!

You can also look for work in your local area in commercials. Kansas City where we live – is not a huge market. I don’t even know if it’s in the top 25,  but there’s a dozen guys in Kansas City that make over $100,000 a year in commercials, and at least 3 or 4 women making that as well. In a market this size that’s good, because that also means there are 20 others that are making 75K, and 50 others making 25K, and 35K, and 45K, etc.

Concentrate on what you have locally and remember to treat every session as an opportunity to hone your chops and keep your reels up to date.

The bigger you get and the more successful you get the more doors will start to open in other places.

Chuck Duran (Demo Producer www.demosthatrock.com):  I work more now with people from all over the United States and the World than I do with LA-based talent. Five years ago, almost everybody I worked with was local. Today 90% of the people that I work with don’t live in Los Angeles. So that’s the beauty of this whole high-tech world that we live in. You have no boundaries.

Obviously, you have to have a little home setup, and we’d need to check the quality on everything.  The quality you’re producing out of your studio needs to be something we can work with. It’s got to be good.

I direct clients over Zoom or Skype, then they send me the files to produce here. The other cool thing about that is when people ask you “Did you record this in your studio?” The answer is “Yes!”, because you did. You recorded in your studio! I’m just putting some bells and whistles on it on my end.

Jennifer Hale: You can really do a lot from where you are. I started my career in Birmingham, Alabama and I was charging 75 for voiceover and 200-300 for an on camera commercial. I was making 40 grand when I left, that’s a lot of volume. And that was out of Birmingham. I could have kept that going and continued to raise my rates and done really well.

You can do this from anywhere. And there’s so much online content creation for games and animation and indie studios.

“I’ll also say this: It is what YOU decide it is” – Jennifer Hale

When I first moved to LA people said “You have to choose either animation or commercials” or “It’s really hard”, and I’d say “blah blah blah, I don’t want to hear that”.

Don’t let other people’s ideas get in your head because they don’t belong there. It will be what you decide is.

Grey Deslisle-Griffin: When the pandemic struck I had to set up a home studio. And I really wanted to just quit everything and relocate to Oregon and wait it out instead! I didn’t do that though. I went to Dee Bradley Baker’s website (iwanttobeavoiceactor.com) and I looked at the Home Recording section. It was important that I figured out what kind of mic I need, and what kind of interface, and I am NOT the kind of person that knows how to do any of that!

I had to buy a laptop but of course I cheaped out because I thought it was only going to be one month, maybe two! I said “I’m not going to spend $1200 on a computer”. So I bought a $300 computer that does nothing.

Steve: And that brings up an important point. When you are investing in equipment, do your research! Sometimes the thing that you’re trying to save money on might be the thing that you book your first job on. It’ll pay for itself and make it worthwhile to get a better piece of equipment. You don’t have to get the fanciest thing out there, but it’s worth doing your research on what works.

So instead of making excuses about your location, use it to your advantage!  Build your acting, recording and editing skills. Build your booth space and build your resilience and adaptability from home.  Hopefully I’ll see you in a virtual session soon on some amazing project!

If you’d like more information on Steve’s Teaching Series, including monthly LIVE classes with other Voiceover Legends, click here.