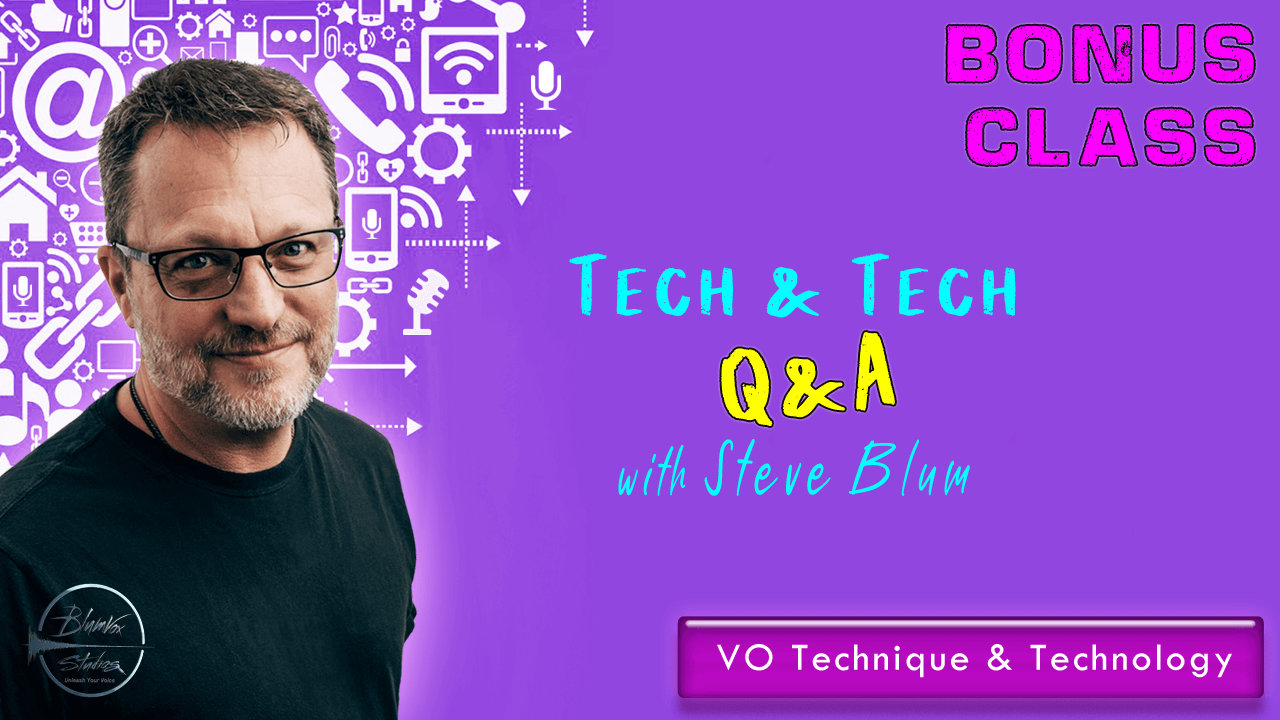 The following are excerpts from the recent Bonus Class “Tech and Tech” held on February 10th. The class was a Q&A style with students and members of the Blumvox Studios Facebook Community asking ANY question that was either Technical Voice Over related or Technical in terms of Equipment.

To watch the recording for the Class click the link at the end of this article.

What’s the best way to treat a room without spending too much?

There are a lot of different things you can do depending on how clever you are and how much room you have. You can build a little booth out of just PVC and moving blankets and that’s pretty effective if you don’t have too much ambient noise outside – like you don’t have a lot of people running around the house and dogs barking, things like that.

A good place to go to see how that’s done is Dee Bradley Baker’s free website, it’s called, iwanttobeavoiceactor.com. With just some PVC pipes, the kind of stuff you use for plumbing, and then hanging moving blankets from those. That’s a pretty simple solution.

I also found something recently that works great as well. It might be a little bit more expensive but not as expensive as getting a real booth like this. It’s called the Kaotica Eyeball and it’s a round foam piece that goes over your microphone and creates a little treated sound chamber.  Both Mary and I have one. She directs in the next office over from me but her room is not treated like this, so we set up an eyeball for her and it’s pretty good! You have to buy them specific to your microphone. They have them in all different sizes and shapes and are around $200, so that’s a pretty good solution. The nice thing about the Kaotica Eyeball is that it has a built-in pop screen too.

The other thing that we found that was pretty effective – surprisingly so – is a reflection filter. They’re made by a company called Monoprice, you can find them on Amazon for about $65. It doesn’t treat the whole room – you put it behind the microphone and it wraps it. It has foam and a metal backing and the panels on the side fold around to close over the reception for the microphone. You have to have a good, solid mic stand to put it on, but it does improve the sound to a degree.

If you’re in a room that’s hard to treat, especially if you have walls and big windows, or high ceilings, these are some solutions that you might be able to incorporate into your space without it costing  you nearly as much as treating the whole room.

Another bonus is if you get something like that on Amazon, you can just return it if it doesn’t do the job you want it to, rather than a bunch of blankets that you’ve already put some holes into.

Every space is different, so you have to try things out.

What techniques do you use to bring up your energy when you aren’t feeling it?

There are so many different things you can do and of course everybody’s going to be different. For example I was sleepy today. It was a long day for me, so I went out for a walk. A nice, brisk walk for 10 minutes. It was like a complete reset, and now I feel so much better.

A lot of it for me is mental. I’ll walk into the booth, especially late at night after I’ve been recording all day and I’m really tired and I Just don’t feel like cranking out 10 auditions. I have an internal Mantra, that “I don’t have to do this, I get to do this,” and just by doing that, it changes my mindset and helps me become more grateful.

Sometimes I just jump around, like I’ll do 20 Jumping jacks. That gets the blood flowing.

Sometimes if I’ve been sitting around, especially if I’ve been editing all day, or working on something else, the blood just pools and settles, and I physically have to get the blood moving through the body.

Other times it’s a shower. We’re at home so we can, but in the studio you don’t have that option.

I meditate too. I am a meditator, so I did that today also. It was a sleepy day for me today so I did several of these things. I went outside and meditated for a few minutes. Going outside is one of the best things that you can do.

Hopefully some of that will help you. I will say don’t drink coffee – that’s not good when you’re going to be doing voiceover. Wait till after or give yourself an hour in between. Coffee will dry you out.

How do you come up with different voices? Voices that sound natural, but also believable and different to how you normally sound?

I’ll give you a tip that Bob Bergen shares with his students all the time. It’s really about using your body. We have the advantage as voice actors to do a lot of stuff behind the scenes that you couldn’t get away with on camera.

Say they’re asking you to do a character that may be diminutive in size but still has a little bit of a guttural thing, like maybe a goblin for example. I will do something physical. I might hunch down a little bit, and then change the placement on the throat so that it’s not on that nice clear space. Maybe that’s tucking it in a little bit, pushing towards the back of the throat. You can raise or lower the pitch or add in a little bit more grave.

Just by doing that, physicalizing it, you can get into the headspace for the character, and the voice will follow. It’s kind of magical, the way that happens. And it works for just about any kind of character.

Play with the physicality of it.

Concentrate less on doing a different voice than embodying the character itself. You’re acting, so you want to get in the mindset of living in that character’s shoes. What would you be experiencing as that goblin? What would your perspective of the world be like if you were in that body? Perhaps everything’s a bit difficult for you. Maybe you don’t have the freedom to go into a restaurant and order a nice steak because they’d throw you out. ALL of that can inform the performance as well. You’ve got to “try on the skin” of these different characters, and live in their bodies to make it authentic.

Lose the inhibitions of doing stuff that feels weird. I look ridiculous when I’m doing some of these characters. So what! Who cares? You do what you have to do to get the voice out.

That’s the most fun part of being a voice actor, is that you get to do that.

When it comes to editing, how much should you edit out of an audition?

That’s a great question. Mary and I talk about this all the time because she believes in leaving everything in. Mary doesn’t edit one nuance out ever. She leaves all the breaths in and that’s perfectly acceptable.

Personally I can’t stand my mouth sounds or my breath so I edit everything. I will leave the breath sound in if it sounds like I would not be able to produce that sound without it, naturally. I did an 8-minute long audition yesterday, and there were certain sections where I had to leave the breaths in for it to sound more natural.

Do what sounds the most natural. That’s the barometer for me. If it sounds most natural with the breath, leave it in.

I always think in terms of the casting director who has to listen to 500 auditions, if they’re hearing a bunch of raspy breathing, especially if you have a sinus condition or there’s some lip-smacking going on. Cut that out.  But keep it authentic too. Choose authenticity over anything. Always use that as your default.