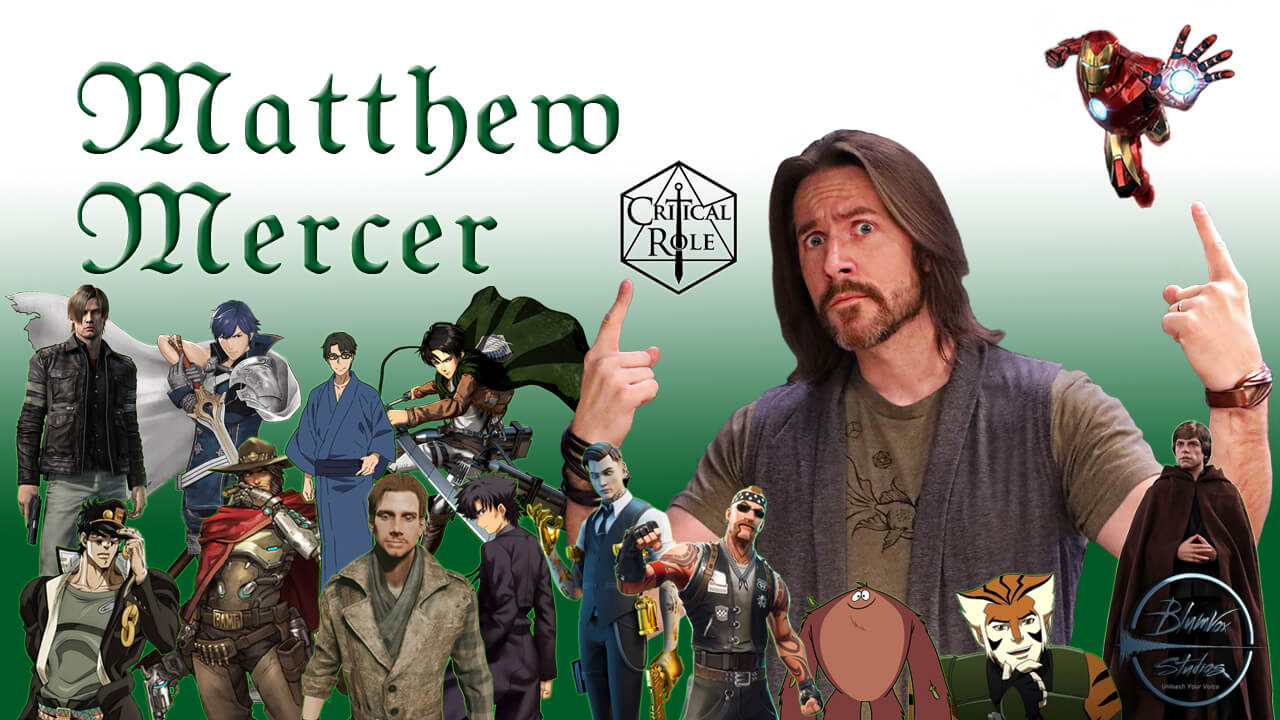 Below is an excerpt from Steve’s 50th Class in his Teaching Series. A great night with Matthew Mercer, Voiceactor and Dungeon Master on Critical Role. A recording of this candid evening and live Q&A with students can be found in the archive section for those with a Teaching Series Membership.

Steve: You came from a family of creatives, your dad was a musician and an engineer, and your mom was a writer and producer. How did their surrender to creativity inspire you?

Matthew: My mom wrote for Burt Reynolds productions, which is why my family moved to California in the first place. That show didn’t last too long though, and there were a lot of challenges for her from that point forward – a lot of projects that fell through. My dad was a gig musician, but his real job was an audio engineer for various companies.

What inspired me was their example of creativity as a passion. As something that you can’t stop – even when success isn’t “happening” for you. They taught me it wasn’t about becoming successful, it was about doing it because you had to. It was a way of expressing yourself, and even if it didn’t work out, it could enrich your life regardless. They never stifled my weird passions growing up either, I think that’s why.

I was very lucky to have parents who understood and supported me getting into theater, being an artist, or even playing video games like Dungeons and Dragons through my early years. I watched their struggle and saw their experience and knew that it’s the experience that matters.

Steve: In one of our first classes we talked about doing this work because you love to do it. You never know if you’re going to be successful or make money at it, and even if you do, it really doesn’t matter if you really don’t love this stuff.

Steve: Anyone who’s ever tried to do this kind of work has struggled to overcome their own personal challenges. You had a stutter when you were younger, yet you gained control of it enough to become one of the greatest storytellers of our time. How are you able to do that?

Matthew: It never really goes away entirely, but I’ve conquered it for the most part. There was a lot of years of speech therapy when I was growing up. My father also had a stutter growing up, it led to a lot of bullying and a lot of really challenging experiences for him. When he discovered that I also was developing a stutter he helped me out as much as he could – in the ways that he wasn’t helped.

We figured out that my brain was moving too quick from my mouth’s ability to keep up, especially when I got excited. Anyone who watches Critical Role will see there are still times where I get excited and start blurring and slurring!

It was also a matter of training myself to let thoughts slow down, and to be methodical when trying to convey information. I’m not saying I was more intelligent, I just said everything faster. So with that training I got past a lot of it, but the experience of being young still made me very nervous about speaking publicly.

I never thought public speaking or performing arts was a part of my future – I actually had a teacher that pushed me into it! I started with role playing games in high school and doing community theater. As scared of it as I was, getting myself out there, past the fear of failure, helped me realize that concentrating on an art form doesn’t allow you to fall into the same anxieties that can trigger a stutter.

It’s still there, I still stumble in the booth. I still stumble in sessions. There are certain phrases and certain word combinations that mess me up, or a series of consonants and vowels will mess me up. Some really cool writers who understand will adjust a sentence or a word usage to make it a little easier for me to say. There are times when I get caught doing 10-15 takes on one thing and I’m like “Why?” It’s just part of the oddness of the human mind, and the weird hang ups that we develop growing up.

A big part of it is surrounding yourself with people that are patient as well. When people aren’t kind or patient with you, that reinforces that anxiety and you tend to pull back even further. A lot of my life growing up, kind of fell into a similar category.

Steve: I was bullied when I was younger, so I understand some of that too. A lot of our students and folks in our community have experienced that too. Anxiety can keep them from being creative, but you’re living proof that you can overcome that and do something magnificent. It’s not a handicap necessarily, you’re just catching up to your genius!

On Mental Health and Authenticity

Steve: You’ve been really open with your fans about your struggles with mental health, which I think is so important – especially right now. How have you so successfully negotiated that, in this industry – that can really trigger that kind of thing?

Matthew:  I think a lot of it has to do with a change in the general conversation around mental health. It wasn’t easy to openly discuss it 15-20 years ago. When you’re going into the entertainment industry, or any industry in which you are public facing, there’s an expectation. You’re expected to put on a veneer, to build a persona that’s marketable, sellable. Everything else you keep private, so your skeletons remain in the closet and people perceive you as this perfect being. It’s a weird fallacy of entertainment that has always made me ill in my stomach.

What I liked about voiceover originally, was that there was anonymity to it. I can do the work and nobody will really recognize my face. Critical Role has obviously changed that, but in a wonderful way. The community doesn’t expect me to fabricate this perceived ideal, they prefer me to be who I am.

I think the conversation with mental health is so much better than it used to be because everyone’s realizing that mental health is not a state, it’s a scale. Everyone to some degree is dealing with some sort of trauma or some sort of mental illness or some sort of anxiety and challenge. I think being led to believe that having those challenges makes you uniquely othered to society is a lonely and damaging path. It’s been that way historically, but it’s changing.

Steve: You guys really gave a voice to that so thank you for doing that for all of us.

Steve: So you’re now a creator on Critical Role, inspiring some of the greatest voice actors of our time and to take their own incredible journeys. Critical Role has also helped to lift millions of people up so they feel accepted and valued. It’s given them the confidence to try new things and to actually take risks and try stuff. It’s a beautiful ripple that you’re putting out globally.

Matthew: Thank you. It’s all about taking risks. D&D and role playing games are a great way to teach yourself that failure isn’t the end. Often it can be a wonderful experience. Failure can lead to so much personal growth.

Failure can lead to learning things in a way that in the long run are so much more useful than success would have been in that moment.

I think that’s one of the major things that I’ve gotten out of role playing games, to understand that taking risks, calculated risks, can be a very wonderful learning experience. And failure, often is as rewarding if not more so.

Steve: and the other side of it is just mystery and surprise and you never know what’s going to happen, so it enriches your life.

Matthew: We’re all just trying our best. That goes for all aspects of this career. I could come here and talk like some trained performer who spent countless years reciting, but I have no idea what I’m doing. I’m just trying to do my best.

Role-Playing and the Importance of Play

Steve: If any of you are wondering about character development or character building, and you’ve never seen Critical Role, check it out here watch Matthew in action. You can see the process in real time, especially when something crazy comes up that’s unexpected. It’s a wonderful process to watch.

Matthew: Play is so important to human existence. It’s been there since day one, but it’s become something we try and unteach now. We beat it out of us as adults in so many places, but it’s SO important to our development and our happiness! Wherever you can find it, wherever you can embrace it, don’t be ashamed of it. Find people that don’t make you feel ashamed for it. Find opportunities to play. You’ll be healthier too.

The Critical Role Foundation – the multi-charity 501C that’s making a difference in lives around the world: https://critrole.com/foundation/